Milan is known as a bustling media and fashion city, with a very wide range of proposals, this city has become one of the main cities in Italy to offer the LGBT clients different choices for gay and lesbian activities, accomodations, tours, bars and clubs. One of the things that people often do when they come to Milan is to do some shopping, you can choose to do some shopping at one of the best places in the world of fashion. 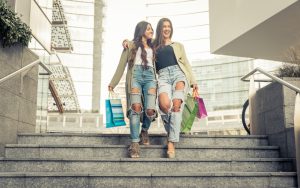 In Milan you will find the most famous and trendiest shops and boutiques in Via Montenapoleone, Via della Spiga and Via Manzoni; some of the best brands like Tiffany, D&G, Gucci, Louis Vuitton, Fendi and Bulgari. Also Italy is well known for its amazing food and Milan has very good dishes to taste as risotto alla milanese, cotoletta alla milanese, risotto with saffron, polenta and typical local sausages. 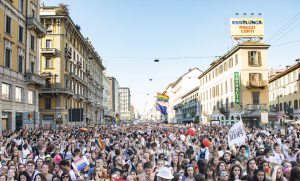 Milan hosts over 20 LGBTQ+ associations, 5 student LGBTQ+ associations, 8 sport LGBTQ+ associations … and 2 LGTBQ+ choirs. It hosts every year a Milano Pride event (a parade with more than 100.000 participants) and an international LGBTQ+ Film Festival.
The local LGBTQ+ associations estimate more than 500,000 LGBTQ+ visitors to the city in 2018.
Milano was the first Italian city in 2012 to register Civil Unions between persons of the same sex and in this, as in so many other things, has been a trailblazer for the whole country.
As Mayor Sala declared during last years’ Pride: “Milan feels the wind of change. My simple promise is that we will walk along with this change. Milan will always be more free and more contemporary. These are the colors of Milan”.

FOCUS ON GAY AND LESBIAN LIFE

Porta Venezia is Milan’s LGBTQ+ neighborhood, the first in Italy to be recognized as such, where the community lives. A lot of its members actually work there many fashion and financial brands are located in Porta Venezia and fill its bars in the evening.

Two years ago the “Porta Venezia” Metro Station was decorated with rainbow colors as a welcome demonstration from the Milan City Hall to LGBTQ+ people.
The main LGBTQ+ shopping street is Corso Buenos Aires, located in the Porta Venezia neighborhood.

This is the area where the Pride Week take place every year and where all the week end the streets are full of people.

Milan has a lot of LGBTQ+ events like the Gay Pride Week in June or the Milano Festival Mix dedicated to LGBTQ+ Movies.

Most of the hotels in Milan are gay friendly and you can be your self without scaring.